A Mile in Pre’s Shoes?

One item on my training to-do list is buy racing flats. More precisely, get professionally fitted for them. I’d be remiss if I didn’t admit I’ve dreamed of this. I equate racing flats with Pre, elites, pros, the fastest of the fast. Now it’s my turn? Well, not because of some qualifying standard. Coach says get racing flats, so off I go.

It’s been a journey to this point. The longer I’ve been running, the more my running shoe requirements seem to change. It’s fascinating (to me, at least).

When I first began running, I was fitted with stability shoes. You know, for those of us who over-pronate. My first kicks were sturdy New Balance “beasts.” (I’ll call them beasts because I forget the actual model.) These accompanied me on my first runs through my first marathon finish line.

After that, I wanted something “lighter.” I switched to Brooks Adrenalines. I quite liked these shoes. They were, in fact, lighter for a stability shoe. I felt so good in Brooks that I grew over-confident and undertook a self-initiated experiment. I purchased a pair of Brooks Pure Cadence. Result: shin splints, even though I never logged high mileage in them. Lesson learned.

I returned to the Adrenalines, with their 12mm heel-to-toe drop, and the shin splints disappeared. The Adrenalines stuck with me for my next two marathons, until I injured my foot.

The personal trainer who worked with me through recovery reevaluated my gait. Her conclusion: I was no longer (or, very minimally) over-pronating. She suggested I transition to a neutral shoe and recommended the Saucony Kinvara 3.

Feeling cautious, I sought a second opinion at the local running shop. They confirmed the trainer’s findings: neutral shoes were the way to go. As I gradually returned to running, I began running in the Saucony Ride 5. Its 8mm drop was a gentle change from the 12mm Adrenalines. Since I eased back into running slowly, the move into the Rides was immediate. No issues.

I eventually purchased the Kinvaras for shorter, faster workouts (i.e. tempo runs, hill repeats). As I trained for the Eugene Marathon, I rotated between the two Saucony models. The Kinvaras, with their 4 mm drop, provided enough cushioning for my feet while allowing me to better feel my foot strike. When race day arrived, I opted to run in the Rides since they were the shoes in which I’d logged all my long runs. I have to say, that training cycle converted me into a huge Saucony fan!

As I prepare for the Chicago Marathon, Coach wants me to begin using the Rides for easy recovery runs. I’ll be increasing my mileage in the Kinvaras, and adding racing flats to the mix.

Two types of flats I’m aiming to test are: 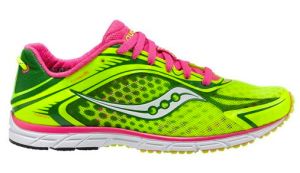 The question is, which flats will eventually work for me? Tell me, if you successfully run in racing flats, which model do you use? I’d love input as I shop for the latest addition to my running gear family!